In the second of a series of interviews to celebrate Black History Month, Women in PR spoke to Evadney Campbell MBE, lecturer, broadcast journalist, trainer and PR consultant. We are delighted that Evadney is also a mentor in this year’s Women in PR programme. 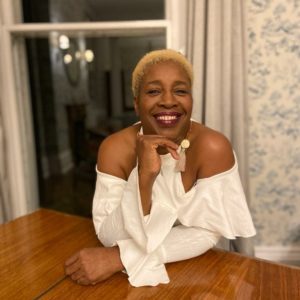 Do you think the industry has a diversity problem?

Yes I think the industry has an issue, however when people talk about diversity they are talking about all types of diversity so, gender, race, disabilities and other aspects. In terms of gender we have an issue at the more senior levels that we need to tackle. With race, we have a problem at all levels that need addressing.

What factors contribute to the lack of racial diversity at all levels?

Primarily, communications and PR were sectors that were seen as being made up of predominately white middle class and the people who sought PR experts were politicians or celebrities who were using the media to spin stories about themselves. People who initially started PR agencies, started these agencies using their personal contacts and if you were white middle class your connections could get you top clientele. As many black people didn’t have those influential connections, we did not see PR as a sector we could be a part of, or that we would be accepted or successful in.

What steps do you think we need to take to make the industry more diverse?

I’m going to start off on a positive note. Things are changing! I’m generally not a great fan of special initiatives and programmes for affecting change within a sector but I think that we need to make it known that this is a sector for black people to get involved in. The work that Women in PR are doing in terms of the mentoring scheme, which bring a broader range of people together, are great, as is the work that Elizabeth Bananuka is doing. Taylor Bennett has also been doing a fantastic job. The more people that we can showcase who do not fit the typical PR image and are not the general face of PR, the more we are opening up the industry.

When I opened Shiloh PR I wasn’t aware of all the black people running agencies or those that were in-house. I came from a journalist background and saw very few stories that reflected my background and my experience.  But I’ve learnt that the media can be inclusive and that we can get access to them. Sometimes the lack of representation wasn’t always down to the fact that the media didn’t want to cover our stories but was sometimes down to how we pitched them and made ourselves available to them. Through Shiloh PR, I have always tried to educate on how to approach the media and to show that you could be out their getting your stories heard. Seven years on and people come to us not only because we look like them but also because we know how to present them in the media.

Do you think brands should be talking about the importance of racial diversity and if so what are the best ways to address the topic?

The obvious answer is Yes! My fear is that the current climate and in particular Black Lives Matter (BLM) has shone a light on some of the things that are happening not only in communications but everywhere. To be honest, I was concerned with how quickly companies were able to put out statements because I thought, ‘well what does this mean in real terms.’ None of us can fail to see the visibility of diversity on our screens nowadays, but how deep does that really go. What are the companies actually doing for their people, how are they treating them within the organisation and how are they helping them to progress?

There are many people who will openly say that they support the BLM movement but the staff that are within the sectors are not experiencing that support and the situation has actually become even more challenging for those people. Everyone can talk, what we really want is to see long-term changes and more importantly we want to see organisations look closely at their people to determine why they are not attracting a more diverse base and why these people have not progressed through the organisation.

Sometimes I think it’s better to stay silent and evaluate internal procedures, meaningfully thinking about what the support means, how are we going to impact change and what are we going to do?  People are no longer taken in by symbols, we’re much more advanced.  People are much more likely to positively react to a statement if the history of the company matches this. People will respect companies more if they take time before they issue a statement.

If you could sum up the reasons behind your success in a few sentences what would they be?

In all the things I’ve achieved I don’t really see success for me personally or for the company because there’s so much more that I want to achieve and I don’t think I’m there yet. As a company we have been able to survive and I’m generally passionate about what I do, I want to do it. I believe in integrity and believe in delivering what I say I’m going to. Honesty is the most important thing and people value that. This is not just a job for me. It’s more than a job – something I believe in. But success for me is a long way away.

What has been the biggest setback in your career and how did you overcome it?

What I would say is that I wish I had set up my own business years ago. I wish I had had the confidence to do that. I wish I had the knowledge to have gone out on my own earlier than I did, but I still have no regrets as I’m loving what I’m doing now.

What would be your advice to young females keen to enter the industry?

If you love people it’s a phenomenal industry. Every success that my client has, I’m living it too. It’s an amazing sector to be in so what I would say to young people is to make sure that you don’t let anyone make you think that where you’re at and where you’re from will hinder you because you have experience that no-one else has. Have the courage to speak up when something needs to be said. Sometimes people think they can’t say certain things because it will impact their career but people just need to trust in themselves. Seek knowledge from others and constantly learn from others and make sure you build connections and contacts.

Do you feel the BLM protests have started to trigger real change in the industry or are people just paying lip service to the issue?

The bottom line is yes it has started to trigger a real change. For those of us that have experienced real uprisings before this definitely feels different. Whether it continues is up to us and we have to keep on at these companies as well as disrupting systemic racism to ensure that it does. This needs to start a long-term change for black people and we need to ensure that it stays. We can’t allow for it to go back to the norm and how it was. We need to stay on top of the negativity and call it out when we see it.